With cultural nods to China’s ancient past and all the eastern glitz and promise of Hong Kong, Shanghai is a city with one foot in the past and one very much in the future.  It’s enchanting and beguiling, yet modern and exciting and well worth a visit.

Start your trip on the Pudong side of the Huangpu river and take a ride on the world’s fastest train, the Maglev.  There’s an LED display speedometer at the front of each carriage so you can be wowed as the number rises to 431kmh!

The new observatory of The Shanghai Tower (the world’s second tallest) wasn’t finished when I last visited, but it opened in November last year and you can bet its views from the top will be breathtaking. 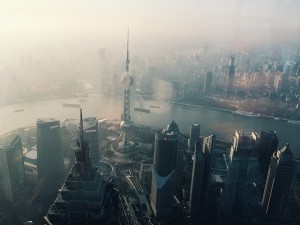 I did make it up the futuristic Oriental Pearl Tower, which I can highly recommend, if only for the re-runs of Mr Bean, which are shown on numerous TV screens that line the queue to the tower’s lift.  It may seem a bit incongruous but Mr Bean is the perfect universal comedy as it needs no translation.

A ride on the Bund Sightseeing Tunnel under the Huangpu takes you, unsurprisingly, to the Bund side of Shanghai, which is where I stayed the first time I visited Shanghai.  I booked into the peace Hotel, which despite being atmospheric was down-at-heel.  After a sympathetic and extensive renovation it’s now a luxury place to stay.  While still characterful and atmospheric, The Peace Hotel now comes with a touch of glamour reminiscent of its 1920’s inception.  I loved the retro cocktails there in the Old Jazz Bar.

Finally, the shopping in Shanghai is not to be missed.  I thoroughly enjoy the, sometimes fierce, haggling in the covered markets, the FenShine being one of the most famous, but if that’s not your thing you’re bound to find something to take home from down the Nanjing Road.  Whatever you get up to in Shanghai, you’ll certainly never forget it.